My hubby and I always visit the elephants when we go to Whipsnade Zoo, we have an annual pass. We saw the latest baby within 16 hours of it being born.
For some time I have envied the visitors who get to work with the animals for a day and mentioned to a new friend that I'd like a day with the elephants.
Just before Christmas she invited Dick and I to go to Woburn Park with her and have lunch with her hubby who works there. We ended up giving one elephant her mid afternoon treat and getting up real close to her because Jo's - the new friend - husband is and elephant keeper at Woburn.
The elephants were brought into an enclosure to give visitors an up close view and one of the females walked around the perimeter, happy to let all of the visitors give her a stroke or pat. After other visitors had gone we were allowed into the enclosure and each fed her a banana. We were surprised at the texture of her skin and body hair, very rough and prickly, nothing there to collect for spinning!!!!!! 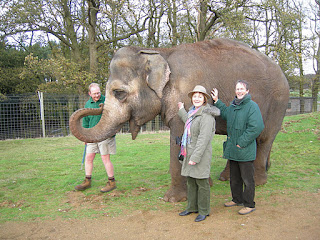 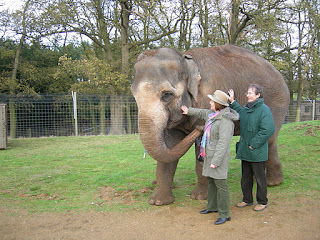 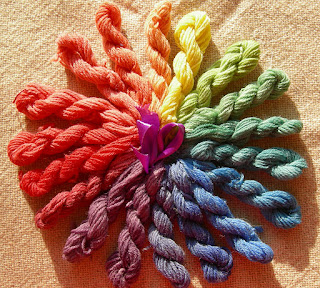 Well, it's such a very long time since I posted and I must try harder. It's not because I've not done anything but between computer problems and family events there has been no time to get down to it.
The above photo shows woollen skeins dyed in preparation for a workshop I am leading with two Weaving and Spinning groups next year. I started with the 3 primary colours, red, blue and yellow, and mixed them in set proportions to create secondary colours. In the workshops we will be mixing several colours, in pairs, to create a colour chart for Kemtex acid dyes. Hopefully in the future we will be able to choose the exact shades we want to use, rather than mixing in a hit and miss fashion, thought sometimes this is creative and gives combinations you may not have thought to combine. It surprised me just how many skeins are needed to do this with only an handful of dyes, so it will be great to get others to help each other create a useful shade card in a day.
Posted by Crafty Weaver at 15:58 No comments:

Another event another display 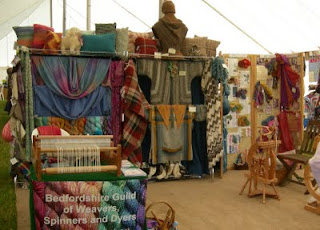 Gosh, what a time lapse!
The Bedfordshire Guild of Weavers, Spinners and Dyers, of which I'm a member had a display and members were demonstrating at a new fibre event, Fibre East at Thurleigh, north of Bedford.
I spent some days creating a display of members' work. First of all rehersing in our dining room and after labelling each item, packing section by section to make reconstruction as easy as possible at the event. Even I was surprised just how long this process took. The time spent was worthwhile, we had a great deal of interest, not only in our display, quiz and fibre feely samples but in joining the guild or coming to workshops. Our jovial demenor and helpfulness was commented on many times.
I'm lucky in that the display can be re-used, at least in part, for our next two events, Wrest Park, Silsoe, August bank holiday weekend and our exhibition at Priory House Heritage Centre in Dunstable, Sept. 5th to 10th.
Next week, I go to the Association Summer school in Edinburgh, spinning exotic fibres and that should be an interesting and relaxing week, followed by a few days holiday in my home county, Northumberland.
Posted by Crafty Weaver at 13:33 No comments:

Blast from the past

Well, I have to say that the effort getting ready for Living Crafts was worthwhile and, even though the weather on Thursday and Friday wasn't great, people came to buy on Saturday and Sunday and I had one of my best shows. 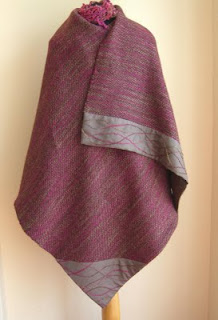 Since then I have been getting ready for other demonstrations, but for these I have returned to working mainly with wool. On June 4th, myself and other members of the Bedfordshire Guild WSD were demonstrating at Wimpole Hall Home Farm where there was a sheep shearing course going on. 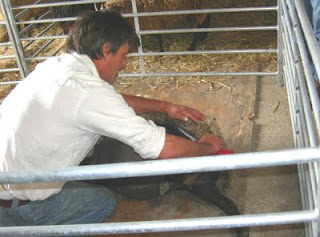 This weekend I am demonstrating at the East of England Show in their 'All About Wool' area alongside people I have never met before. Of course all of my display has to relate to wool.
For both of these I scrounged around in my work room and studio for every piece of woolen cloth and yarn that I still had stashed away. It seemed as though every nook and cranny that I investigated had something from the past including two lengths of woven cloth. What shall I do with them? Well! not many people make their own clothes any more and they were woven in a time when I sold fabric lengths at fairs and, more profit can be made from made up items. So I got the sewing machine out and produced three shawls. I also made three cushions. One of which is made from the extra length of fabric woven earlier this summer, for knee rugs, using British Yarn. You can see them in the photos. 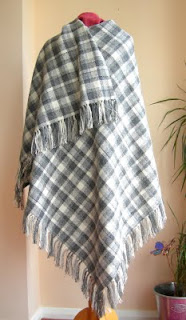 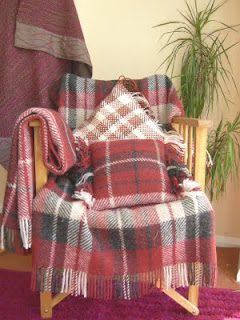 Can't wait to get on

I have started weaving in ernest for Living Crafts at Hatfield House in May.
My inspiration is colour and although I am always looking for new combinations some sell better than others. Red is one of my favourites, bright and cheerful but not too in your face. Rainbows seem to be popular with most people.
The shawls that I can't wait to get on with are these. The warp has been spaced dyed in 'rainbow' colours. I've not included yellow because it is not popular and affects designs, not for the better, if used in the wrong proportions. 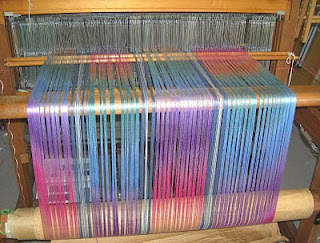 I will be weaving the first length with the navy included in the stripes. The next may well be woven with blue. I have dyed the yarn but have been known to change my mind when it comes to weaving!!!!
These two, nearly finished shawls, use my handspun yarn to accentuate the weave and that is why this weave is one of my most favourite. The fringes have yet to be twisted, that is a job for evenings infront of the tele, and they have not been wet finished yet. 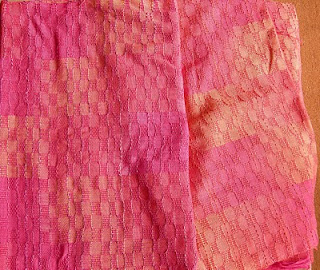 Hankies not to be Sniffed at

Each year I buy silk cocoons to give to 'children of all ages' when showing and talking about silk and silkworms. Occasionally I make use of them myself in my craft work.
The silk can be reeled from the cocoons for spinning into yarn once the end, actually the beginning, of the fibre is found. The silk can also be 'harvested' another way. That is by making silk hankies. Here is a number of such silk hankies bought from a supplier. 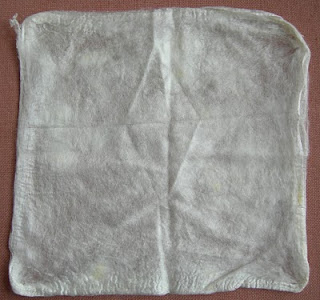 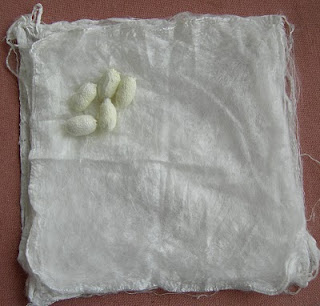 This picture shows hankies that I have made recently in my endeavours to find the most efficient way to make these Mawatas (Japanese for stretched cocoons)and a quantities of ingredients for the softening/degumming solution.
The cocoons in this picture are little use for mawatas, they are 'spent', that is the moth has hatched and there is a hole in the cocoon, made by the moth on hatching. This may have caused the fibre to be broken. I may well try some in my experiments.
Spent cocoons are not used in the reeling process because of the collar of built up fibres and 'glue' (serecin, the gum produced by the silkworm to bind the cocoon fibre together). This could cause the fibre to break at the collar and make the process less efficient, but, as I am going to dissolve the gum, I may be able to produce adequate hankies.
Once my experimentation has produced enough hankies I propose to spin them into yarn. I may even dye the hankies before spinning the fibre.
Watch this space!
Posted by Crafty Weaver at 09:41 No comments:

Is this really my first post for this year?
I know we have had internet connection problems but have often thought of 'things' to post about and I hadn't realised that I'd not written anything yet in 2011. A few weeks before Christmas I had an idea that I'd like to dye some self stripping silk yarn. I had seen some in a yarn shop when shopping with a friend but thought I'd like to have my own colour combinations. How could I achieve this? I had run a workshop with Beds WSD guild when we had dyed some sock yarn so that when knitted it would give self striping socks, but this had meant making several small, joined skeins on a peg frame, tyeing each one so that it didn't get tangled and dyeing in the microwave. It worked well but I want subtle graduations of colour in yarn that could be used in weaving and/or knitting.
One day the idea came to me that a knitting machine would be useful in this project. Where to get one? I needed to find a kind friend with one or acquire one cheeply, as this was just an experiment.
Next day, at a craft fair, I was talking to a couple who had admired my weaving and inconversation I told them of my idea. Surprise, surprise!!! The lady had a knitting machine to dispose of. Even more surprise, when she said she didn't want anything for it, she was decluttering and had another anyway.
On the third day we were all free and so I was able to collect the knitting machine.
This seemed to be a good omen!
After replacing some warn parts and cleaning the machine, another friend came to show me how to use it. I only needed the very basic information.
I got on and knitted some 'blanks', knitted rectangles of 100g of silk yarn. These were soaked overnight to make sure the yarn was thoroughly wetted through and would take the dye, which I applied across the knitting in stripes, encouraging each colour to mingle a little with the next, so there were no definite lines. Once the dye was set and the knitted piece washed, rinsed and dried, I pulled out the knitting, wound the yarn into a skein and steamed out the kinks from knitting. The silk yarn was ready to knit, but into what?
I weave scarves and shawls and have knitted a few recently, so, on seeing that one of my cushion covers was showing signs of wear, decided to replace it, the cushion at the bottom of the picture is the result.
The top square cushion is worked with a finer yarn, 50/50 wool and silk, in a pattern called moss stitch chevron. They have both been admired and I am pleased with the result so, now - more yarn to be machine knitted and dyed. Maybe some of it would be great for a scarf weft. A change from my usual habit of space dying the warp.
Posted by Crafty Weaver at 20:17 1 comment:

This is a Flickr badge showing items in a set called Scarves and Shawls. Make your own badge here.

Crafty Weaver
Married for 50 years now, with two sons and now 4 grandchildren. I retired from my 'real' job some years ago and took up my favourite craft to fill time and earn a crust or two selling my woven wares at craft fairs. It was soon apparent that some low priced items were needed to help pay expenses and so my other craft interests, paper crafts and braid making to name just two, found their place. Paper crafting and card making have become my main relaxation activities. Gardening and walking will come more to the fore in warmer months.